The Writer at home 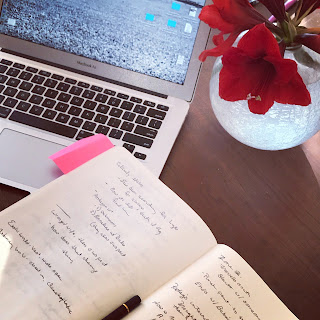 I'm not a big fan of second-person point of view, but it seemed right to this homage to my biggest fan

The Writer In The Kitchen
1. You come home to find the crockpot bubbling away on the spotless counter and believe this to be a good sign. The writer is deep in her work, words are flowing as freely as the champagne you plan to open when this book that has consumed your lives appears atop the bestseller list. Although you have been warned that this is an unlikely outcome, you prefer this ending to the story.
When you locate the writer in the disarray of the spare bedroom she calls an office, she thanks you for your enthusiasm, but regrets the misunderstanding. That crockpot holds today’s sorrows: the rejections, the bad decisions, the harsh judgments. It is her last gasp of effort at the end of the day, a final attempt at creating something worthy. You will lift the crockpot’s lid, even though you have been warned never to do so, and interrupt the cooking process. You do not understand process. Just one peek. What’s the harm? You open and you sniff, reassuring the writer that it will be good.
You will then call for take-out because everything is now ruined.
2. The smell of garlic lures you into the kitchen. The writer is at the stove, wineglass in hand, cheerily sautéing in accordance with directions from a recipe torn from the pages of a magazine she found in the doctor’s waiting room.
It smells wonderful. You ask what it is. The writer gropes for the name of the recipe, but that information was on another page . One she didn’t rip out because she was sure she’d remember. It doesn’t matter to you, but the writer is stuck. She can not proceed until she finds the exact words she is looking for. Chicken something. Piccata? No. It starts with a P. Puttanesca? The writer begins telling a story about the recipe and the doctors office and soon, the garlic has burned. You suggest an alternative meal, but the writer can not give up her vision.
This will lead to an argument. You are no longer hungry.
3. This is what you are having for dinner: Moroccan meatballs in raisin sauce served with a side of Israeli couscous and a dry Italian red. The writer posted a photograph on Facebook two hours ago. It looks delicious. It also looks like it will be very cold by the time you arrive to eat.
Those intervening hours give you time to consider the whys of this situation. It is possible the writer has finished her work and is happy with the results. It is also possible that the writer has chosen an alternative career in food service and you are Patient Zero.
It will be neither. Angst has driven the writer to social media to increase her visibility. She has also started a blog, which she asks you not to read. But later that night, after the writer finishes most of the wine and retires, you do look and find you have become her main character. It is not a flattering portrait, but you are secretly proud because the writing is good.

4. You make plans for dinner out. The writer is grateful. She has not left the house in four days. On the ride to the restaurant she tells you about her progress and then says this: Thank you for your support. It is the best bit of dialogue she’s ever written.
Posted by Unknown at 11:56 AM No comments:


The last Hooligans Picnic was probably 40 years ago. The guys that hung out at my grandparent's Southside tavern — that's the south side of Chicago, Roseland to be exact — would reserve some tables in a forest preserve, rent a few kiddie carnival rides to keep us occupied and throw some charcoal in a 55-gallon drum that had been sliced in half and sandblasted at the corner auto body repair shop. It was Labor Day and the neighborhood celebrated it vehemently. St. Patrick's Day was for rookies.
A few kegs of PBR or Schlitz were rolled in, the neighborhood beer, back before they were ironic or cool. The ladies circled their aluminum chairs near the kegs because that was the best shade. They refused the beer and drank highballs out of plastic cups.
I remember the drinks. Remember sneaking a sip when no one was looking. And I remember making 7 and 7s for the aunties (Seagrams 7 and 7-Up, but not too much 7-Up. They were very specific in their instructions.)
But I don't remember the food. Hot dogs, I'd guess. It was Chicago, after all.
The Hooligans broke up, moved away, drank themselves to death. It's what you'd expect from a group created on a bar stool. I moved too. To Carbondale — Southern Illinois University — where the Labor Day picnics were on rotting old porches and the beer wasn't much better. But the entire bottle was now mine. I didn't have to sneak sips.
A grill was always going. There were hot dogs. And hamburgers. Standard grill fare, far better than standard cafeteria fare. Some ambitious girl would show up with a salad of shredded iceberg lettuce and grated carrots, not realizing there was nothing to eat it with. We were moving up in the world.
Years later, the calendar pages flying past as if blown by a tornado, I flip through a pile of cookbooks, looking for a great Labor Day meal. I already chosen the beer. A home brew quietly aging in the basement. But the meal? It has to have zucchini in it. And tomatoes. Because that's what I picked up at the farmers market. I've found several complicated recipes, a dozen ingredients that look beautiful in the after pictures. But so much work.
Last week, a friend, Nathalie Girod, posted a picture of her lunch on Facebook. Just slices of the freshest vegetables, lightly grilled. I didn't ask her for the recipe, because she won't have one. She never does. Great cooks don't work that way. So I made one up.


Cut  zucchini lengthwise into 1/4 inch slices.. Brush with olive oil, sprinkle with sea salt and pepper and put it directly on a medium hot grill until the grill makes marks on it. That'll be about 6 minutes. Flip it over and repeat on the other side. I'll sprinkle some parmesan on top sometime. Maybe.